Kon-Boot is an prototype piece of software which allows to change contents of a linux kernel (and now Windows kernel also!!!) on the fly (while booting). In the current compilation state it allows to log into a linux system as ‘root’ user without typing the correct password or to elevate privileges from current user to root. For Windows systems it allows to enter any password protected profile without any knowledge of the password. It was acctually started as silly project of mine, which was born from my never-ending memory problems 🙂 Secondly it was mainly created for Ubuntu, later i have made few add-ons to cover some other linux distributions. Finally, please consider this is my first linux project so far 🙂 Entire Kon-Boot was written in pure x86 assembly, using old grandpa-geezer TASM 4.0.
Additional notes:

You can use SDelete both to securely delete existing files, as well as to securely erase any file data that exists in the unallocated portions of a disk (including files that you have already deleted or encrypted). SDelete implements the Department of Defense clearing and sanitizing standard DOD 5220.22-M, to give you confidence that once deleted with SDelete, your file data is gone forever. Note that SDelete securely deletes file data, but not file names located in free disk space.

Using SDelete
SDelete is a command line utility that takes a number of options. In any given use, it allows you to delete one or more files and/or directories, or to cleanse the free space on a logical disk. SDelete accepts wild card characters as part of the directory or file specifier.

Compressed, encrypted and sparse are managed by NTFS in 16-cluster blocks. If a program writes to an existing portion of such a file NTFS allocates new space on the disk to store the new data and after the new data has been written, deallocates the clusters previously occupied by the file. NTFS takes this conservative approach for reasons related to data integrity, and in the case of compressed and sparse files, in case a new allocation is larger than what exists (the new compressed data is bigger than the old compressed data). Thus, overwriting such a file will not succeed in deleting the file’s contents from the disk.

Cleaning free space presents another challenge. Since FAT and NTFS provide no means for an application to directly address free space, SDelete has one of two options. The first is that it can, like it does for compressed, sparse and encrypted files, open the disk for raw access and overwrite the free space. This approach suffers from a big problem: even if SDelete were coded to be fully capable of calculating the free space portions of NTFS and FAT drives (something that’s not trivial), it would run the risk of collision with active file operations taking place on the system. For example, say SDelete determines that a cluster is free, and just at that moment the file system driver (FAT, NTFS) decides to allocate the cluster for a file that another application is modifying. The file system driver writes the new data to the cluster, and then SDelete comes along and overwrites the freshly written data: the file’s new data is gone. The problem is even worse if the cluster is allocated for file system metadata since SDelete will corrupt the file system’s on-disk structures.
The second approach, and the one SDelete takes, is to indirectly overwrite free space. First, SDelete allocates the largest file it can. SDelete does this using non-cached file I/O so that the contents of the NT file system cache will not be thrown out and replaced with useless data associated with SDelete‘s space-hogging file. Because non-cached file I/O must be sector (512-byte) aligned, there might be some left over space that isn’t allocated for the SDelete file even when SDelete cannot further grow the file. To grab any remaining space SDelete next allocates the largest cached file it can. For both of these files SDelete performs a secure overwrite, ensuring that all the disk space that was previously free becomes securely cleansed.

On NTFS drives SDelete‘s job isn’t necessarily through after it allocates and overwrites the two files. SDelete must also fill any existing free portions of the NTFS MFT (Master File Table) with files that fit within an MFT record. An MFT record is typically 1KB in size, and every file or directory on a disk requires at least one MFT record. Small files are stored entirely within their MFT record, while files that don’t fit within a record are allocated clusters outside the MFT. All SDelete has to do to take care of the free MFT space is allocate the largest file it can – when the file occupies all the available space in an MFT Record NTFS will prevent the file from getting larger, since there are no free clusters left on the disk (they are being held by the two files SDelete previously allocated). SDelete then repeats the process. When SDelete can no longer even create a new file, it knows that all the previously free records in the MFT have been completely filled with securely overwritten files.

To overwrite file names of a file that you delete, SDelete renames the file 26 times, each time replacing each character of the file’s name with a successive alphabetic character. For instance, the first rename of “foo.txt” would be to “AAA.AAA”.

SSH (Secure Shell) is a protocol which supports logging into a remote system or executing commands on a remote system, using an encrypted communication between the two systems.

BFD is a modular shell script for parsing applicable logs and checking for authentication failures. There is not much complexity or detail to BFD yet and likewise it is very straight-forward in its installation, configuration and usage. The reason behind BFD is very simple; the fact there is little to no authentication and brute force auditing programs in the Linux community that work in conjunction with a firewall or real time facility to place bans. To use BFD you must install APF Firewall first.
Download BFD:

After the installation is complete you will receive a message saying it has been installed.
Next configure the firewall:

Find the following lines and replace them with your details:
# Enable/disable user alerts [0 = off; 1 = on]
ALERT_USR=”1″
#
# User alert email address
EMAIL_USR=”your@mail.com”
#
# User alert email; subject
SUBJ_USR=”Brute Force Warning for $HOSTNAME”
#
Now you should put your ip address to allow hosts so you will not accidentally lock yourself out.

Now it is ready to start the BFD system:

You can always use netstat command to get list of connections under Windows. Open command prompt by visiting Start > Run > Type “cmd” in box.

netstat is a command line utility which displays protocol statistics and current TCP/IP network connections in a system. Type the following command to see all connections:

You can use find command as filter to searches for a specific string of text in a file. In the following example you are filtering out port 80 traffic:

Find the IP address which is causing maximum number of connection and block it using Cisco firewall or IPSec. Another protective measurement is to harden the TCP/IP stack.

I know how to delete a file securely using GNU/Linux and Open source tools under Linux. I’m looking for DoD 5520.22-M or NNSA NAP-14.x.secure compliant delete utility under Windows. How do I delete a file permanently under Windows XP or Server operating system with NTFS; so that no one can retrieve my data?

You need to use SDelete which, implements the Department of Defense clearing and sanitizing standard DOD 5220.22-M, to give you confidence that once deleted with SDelete, your file data is gone forever. Download sDelete (47KB).
It works on following Microsoft operating systems:

Eraser is an advanced security tool (for Windows), which allows you to completely remove sensitive data from your hard drive by overwriting it several times with carefully selected patterns. Works with Windows 95, 98, ME, NT, 2000, XP, Vista, Windows 2003 Server and DOS. Eraser is Free software and its source code is released under GNU General Public License. Uses the Guttmann (Default), Pseudorandom Data and US DoD 5220-22.M methods. Download Eraser software here.

A note about wiping a hard disk

Use Darik’s Boot and Nuke (“DBAN”) is a self-contained boot disk that securely wipes the hard disks of most computers. DBAN will automatically and completely delete the contents of any hard disk that it can detect, which makes it an appropriate utility for bulk or emergency data destruction.

How to remove files securely so that it cannot be undeleted. Peter Gutmann paper “Secure Deletion of Data from Magnetic and Solid-State Memory” has very good information. Here are some commands/tools available under Debian GNU/Linux (it should work with other Linux distributions) to delete file securely.

This command is a replacement for rm command. It works under Linux/BSD/UNIX-like OSes. It removes each specified file by overwriting, renaming, and truncating it before unlinking. This prevents other people from undelete or recovering any information about the file from the command line. Because it does lots of operation on file/directory for secure deletion, it also takes lot of time to remove it. Download srm from http://sourceforge.net/projects/srm (RPM file is also available for RPM based Linux distributions)

1. Untar and install the srm:

2. How to use srm?
srm syntax is like rm command. Read man srm. Here is a simple example:

wipe: It is a secure file wiping utility

Download wipe from http://wipe.sourceforge.net/
1. Untar and install the wipe

shred: Delete a file securely, first overwriting it to hide its contents.

It is available on most of Linux distributions including Debian GNU/Linux. To remove file called personalinfo.tar.gz :

Read the man page of shred(1) for more information. Most of these utilities are not effective (read as useless) only if :

Pyrit is a GPU cracker for attacking WPA/WPA2 PSK protocols. It allows to create massive databases, pre-computing part of the WPA/WPA2-PSK authentication phase in a space-time-tradeoff.  Pyrit works with many platforms including CUDA, ATI-Stream, OpenCL and VIA Padlock.

How to
Listing available cores 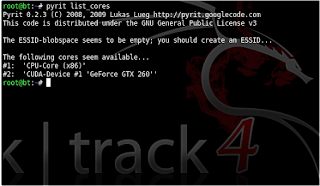 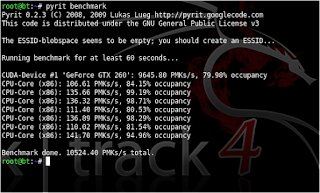 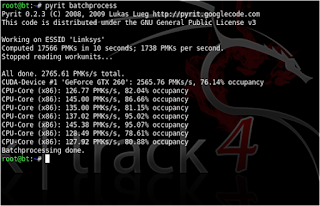 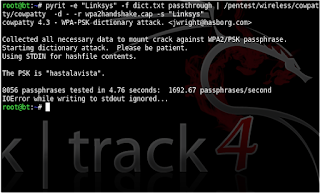 Get notified when a user logs in with root privileges.
1) Edit .bashrc under /root to get notified by email when someone logs in as root
2) Add the following:

Backtrack is an operating system that is specially designed for networking security. Bactrack OS is based on Linux. As of this writing the latest version of Bactrack is Backtrack4 with many, many useful applications. Before installing BT4, make sure you have installed Ubuntu on your computer so we can use Ubuntu’s Grub for booting.
Follow these steps to install and configure dual booting Ubuntu / Backtrack4.