Details on each tool.

bmon
bmon is a portable bandwidth monitor and rate estimator. It supports various input methods for different architectures. Various output modes exist, including an interactive curses interface, lightweight HTML output, and simple ASCII output. Statistics may be distributed over a network using multicast or unicast and collected at some point to generate a summary of statistics for a set of nodes.

You can select a specific interface to view traffic details. In the screen shot below I selected eth0, ‘g’ for graphical statistics and ‘d’ for detailed statistics. 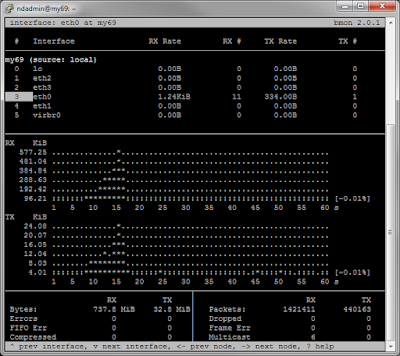 bwm-ng
bwm-ng can be used to monitor the current bandwidth of all or some specific network interfaces or disks (or partitions). It shows total of in and out as well as total of all interfaces/devices.

To launch cbm just enter sudo cbm at the terminal.

ibmonitor
ibmonitor is an interactive linux console application which shows bandwidth consumed and total data transferred on all interfaces.

Its main features are:

If you want to run the application use the following command

Once you are in ibmonitor folder use 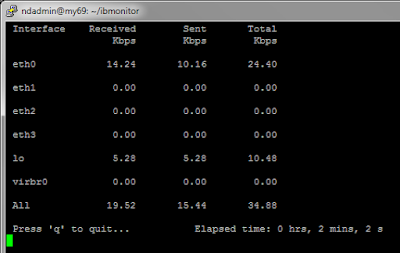 pktstat
pktstat listens to the network and shows the bandwidth being consumed by packets of various kinds in realtime. It understands some protocols (including FTP, HTTP, and X11) and adds a descriptive name next to the entry (e.g., ‘RETR cd8.iso’, ‘GET http://slashdot.org/’ or ‘xclock -fg blue’). 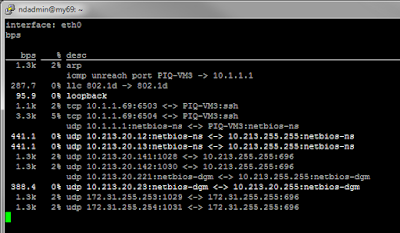 tcptrack
tcptrack is a sniffer which displays information about TCP connections it sees on a network interface. It passively watches for connections on the network interface, keeps track of their state and displays a list of connections in a manner similar to the unix ‘top’ command. It displays source and destination addresses and ports, connection state, idle time, and bandwidth usage.

To launch tcptrack just enter sudo tcptrack -i eth0 at the terminal.

tcptrack can also take a pcap filter expression as an argument. The format of this filter expression is the same as that of tcpdump and other libpcap-based sniffers. The following example will only show connections from host 10.1.1.2

The next example will only show web traffic (ie, traffic on port 80)

MRTG
MRTG (Multi Router Traffic Grapher) is free software for monitoring the traffic load on network links. It allows the user to see traffic load on a network over time in graphical form.  MRTG is used by programs like Cacti to gather and graph stats over time.

Cacti
Cacti is a complete network graphing solution designed to harness the power of RRDTool’s data storage and graphing functionality. Cacti provides a fast poller, advanced graph templating, multiple data acquisition methods, and user management features out of the box. All of this is wrapped in an intuitive,easy to use interface that makes sense for LAN-sized installations up to complex networks with hundreds of devices.

Cacti is great for gathering stats over time (using both MRTG and RRDTool) and creating hourly, daily, weekly, monthly and yearly graphs.  These graphs can be invaluable in identifying trends and potential problems.  In fact, just today I used the following graphs to identify a problem on my corporate network: 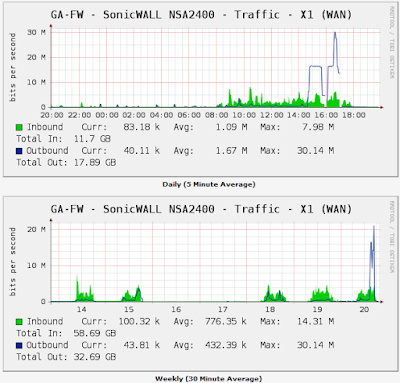 Here’s another one showing network utilization over time. 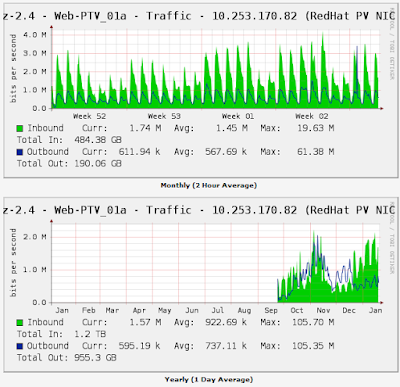 Iperf allows the user to set various parameters that can be used for testing a network, or alternately for optimizing or tuning a network. Iperf has a client and server functionality, and can measure the throughput between the two ends, either unidirectonally or bi-directionally. It is open source software and runs on various platforms including Linux, Unix and Windows. It is supported by the National Laboratory for Applied Network Research.

When used for testing UDP capacity, Iperf allows the user to specify the datagram size and provides results for the datagram throughput and the packet loss.

When used for testing TCP capacity, Iperf measures the throughput of the payload. One thing to note is that Iperf uses 1024*1024 for megabytes and 1000*1000 for megabits. There is a Graphical user interface (GUI) front end available called jperf.

Typical Iperf output contains a timestamped report of the amount of data transferred and the throughput measured.

Iperf is significant as it is a standardized tool that can be run over any network and output standardized performance measurements. Thus it can be used for comparison of wired and wireless networking equipment and technologies in an unbiased way. As it is open source, the measurement methodology can be scrutinized by users.

See also Use Iperf to Measure Network Throughput (Bandwidth) for examples and details on using Iperf.