Yesterday while I was doing some performance testing on Amazon EBS (elastic block storage) volumes attached to a Windows AMI (Amazon machine instance) I ran into an unanticipated issue – the maximum number of drives associated with an EC2 Windows server was lower than I expected.  The max connected drives is 12 – this includes both ephemeral drives and EBS volumes.  This is a little bit of a surprise, especially since Linux instances are supposed to handle 16.

I haven’t run across this little tidbit anywhere, nor could I find it today when specifically searching for it, so I thought I’d post a few details about my findings.

First off, yesterday I spun up an Extra Large Instance (AKA m1.xlarge) and created a dozen or so 5GB EBS volumes and began attaching them to the instance.  Since I was creating several I used the EC2 command line tool ec2-create-volume:

In the preceding command the “-s 5” creates a 5GB volume and “-z us-east-1d” creates the volume in the specified Amazon Availability Zone, which by the way, has to match that of the instance to which you will attach the volume.

I attached some volumes using ElasticFox. . .

. . . then attached some with the EC2 command line tool ec2-attach-volume:

Doing this particular task isn’t for the faint of heart as you have to specify the device name (-d xvdm, for example) which has to be unique for each volume attached to a server instance.  You may find it easier generally to use ElasticFox or the AWS Management Console.

Let me take just a moment to point out that, depending on the instance type, you will already have two or more drives.  For example the instance I used here, m1.xlarge, has a 10GB “C drive,” and four 420GB drives, D, E, F & G (by default) in Windows.  In Windows Disk Management these will be disks 0-4.  As you add an EBS volume it will be Disk 5, and so on.

I actually attached five EBS volumes in one fell swoop from the command line, and much to my chagrin I immediately lost connectivity to my instance – I had an RDP session open at the time which immediately quit responding. 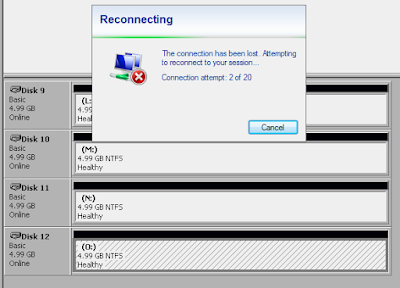 Since I lost connectivity to the instance and couldn’t re-establish a Remote Desktop connection I manually rebooted the instance with ElasticFox.  However, this didn’t work.  Initially I thought I had overlapped a device name which the instance couldn’t handle so I detached the five EBS volumes previously attached from the command line and rebooted the instance.  I was overjoyed when I was able to login again.

Next I set about to more carefully attach the volumes, which I did one at a time with ElasticFox.  Again, after attaching the five additional volumes my instance stopped responding.  At this point I wasn’t sure if I had reached the limit of attached volumes, if one or more volumes had some sort of problem, or if someone at Amazon was messing with me.  I had to find out so I did some testing. . .

I starting running a continuous ping (tcping actually) to the instance (so I would know if/when it crapped out and when it was back online after rebooting) and set about testing connecting EBS volumes to the instance. Sure enough, every time I connected too many EBS volumes the instance would hang.  I wanted to test this against instances with more (and less) ephemeral drives so I also started up a Small Instance (AKA m1.small) and the mack-daddy of them all a High-Memory Quadruple Extra Large Instance (AKA m2.4xlarge).  These two instance types come “out-of-the-box” with two and three drives each, respectively.

Don’t believe me on the m2.4xlarge instance?

So, with all three server types, m1.small, m1.xlarge and m2.4xlarge running Windows the magic number of (total) drives was 12 before I started having problems.  An interesting note is that you can actually add a 13th drive and everything appears to be fine.  It’s when you add the 14th drive that all hell breaks loose & you instantly lose access to the instance.  Once this happens you have to detach two volumes then forcibly reboot the instance before it starts to respond.  It certainly is good that you can at least regain access.

Another interesting note is that the device names went up to xvdp (which is actually displayed as the highest device letter when attaching volumes in ElasticFox) then started back at xvdf. 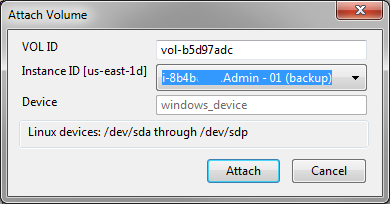 The bottom line is that through a little work yesterday and today I was able to determine definitively that Windows instances (at least instance-store, or S3-backed instances running Windows 2003 – not sure about Windows 2008 on EBS-backed storage) cannot have more than 12 total drives attached.

I’ve been using ElasticFox for a while now and thought I’d jot down a few notes about it.  I don’t use it exclusively to manage my Amazon Web Services (AWS) EC2 instances, EBS volumes, etc., but usually I do go there first.  It’s worth mentioning that I also use the AWS Management Console and EC2 command line tools (both in Windows and Linux).  Typically I keep ElasticFox open as I access it several times a day.

One of the best things about ElasticFox is that you can add “Tags” to instances, EBS volumes, etc.  Tags are your own notes about the instance, like a friendly name.  I really wish Amazon had a field like this that was tied to the instance so it would be available in all tools.  One minor draw-back to tags are that they only apply to the particular browser in which they are created.  They don’t, for example, if you logon as a different user to your machine, or on other machines.

With ElasticFox you can connect to various regions, even with different credentials.  It allows you to manage the following by selecting the appropriate tab:

Read more about and download the Elasticfox Firefox Extension for Amazon EC2 and enjoy.

See also Copying ElasticFox Tags from One Browser to Another.

ElasticFox doesn’t support versions of FireFox above 3.x, so get Elasticfox (for EC2 Tag) which adds a few more nice features. 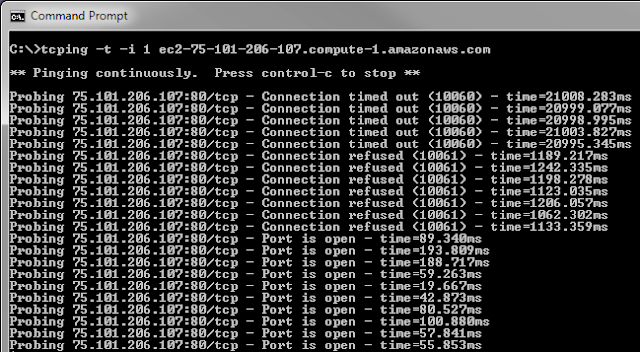 I’ve searched high and low for a good all around command line utility to interact with Amazon S3 buckets from Windows.  While I’m still searching for just the right utility for me here are a few which I use from time-to-time.   Why use more than one, you ask?  Well, since I haven’t found just the right one for all occasions I use the one that works best for the particular task at hand.

S3.exe
S3.exe is a Windows command-line utility for Amazon’s S3 & EC2 web services that requires no installation, is a single .EXE file with no DLLs, and requires only .NET 2.0 or Mono, so it will work on a plain Windows installation.

#Sh3ll (Amazon S3 command shell for C#)
#Sh3ll (pronounced sharp-shell) is a C# based command shell for managing your Amazon S3 objects.  It is open source and provided by SilvaSoft (click to download #sh3ll and for more information). #Sh3ll is built upon the Amazon S3 REST C# library, and it runs on both .NET 1.1 and .NET 2.0.

Robert Evans over at cracked.com wrote this great article about the force known as Apple, led of course by Steve Jobs.  Evans reminds us of their over-the-top quest to keep everything Apple top secret until Mr. Jobs is ready to sit in a comfy chair in his jeans and turtle neck to reveal the next great wonder of the world on their way to world domination.  Don’t believe me?  This is an excerpt from a recent US Patent Office filing from Apple listing none other than Steve Jobs himself:

“Apple can further determine whether a user pays attention to the advertisement. The determination can include performing, while the advertisement is presented, an operation that urges the user to respond; and detecting whether the user responds to the performed operation. If the response is inappropriate or nonexistent, the system will go into lock down mode in some form or other until the user complies. In the case of an iPod, the sound could be disconnected rendering it useless until compliance is met. For the iPhone, no calls will be able to be made or received.”

OpenSSH for Windows is a free package that installs a minimal OpenSSH server and client utilities in the Cygwin package without needing the full Cygwin installation.  The OpenSSH for Windows package provides full SSH/SCP/SFTP support. SSH terminal support provides a familiar Windows Command prompt, while retaining Unix/Cygwin-style paths for SCP and SFTP.

Find more information and download OpenSSH for Windows from SourceForge.

For a couple months now I haven’t been able to update my precious Windows 7.  I would get a message that the updates failed with, “Windows Update error 80072efd.”  I tried all the steps from the Windows Help and Support window (running the Windows Update troubleshooter and adding the Windows Update websites to the Windows firewall exception list) to no avail.  Out of desperation I found a reference to correct this problem on Vista by running netsh winhttp reset proxy.  It worked!

At the command prompt run: 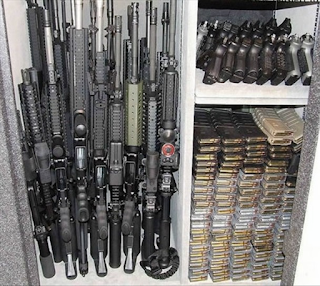 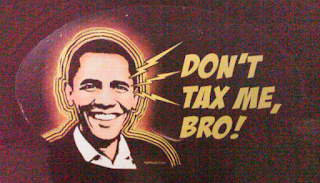