If you are like me you use the command prompt a lot.  It seems each time I logon to a new system I have to setup the command prompt just the way I want.  The first thing I do is create a shortcut in the Quick Launch toolbar.  Next I modify that shortcut so it will better suit my needs.

Right-click the shortcut and select Properties.  On the Shortcut tab add ” /f:on” (without the quotes) to the Target – make sure there is a space between cmd.exe and /f:on, and if cmd.exe ends with a quote place the /f:on outside the quotes. This will enable file and directory name completion characters – you can use Ctl + d for directories and Ctl + f for files.  I also like to set the Start In target to C:. 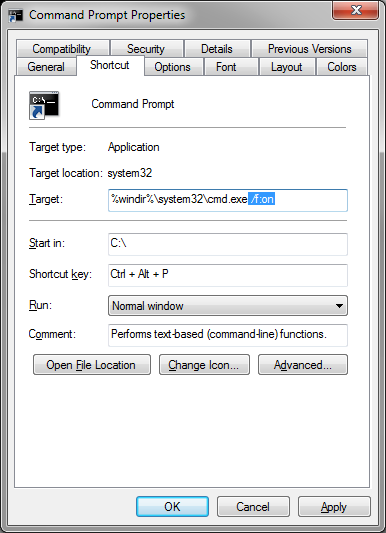 Click the Options tab.  I like to increase the command history buffer to at least 100, this is especially useful if you have a command prompt open for a long time and want to scroll back through your previous commands.  Check discard old duplicates to, well, do just that.  And check QuickEdit mode.  This is a great one as it enables selecting text directly and pasting directly (with right-click) without having to right-click and select copy and/or paste. 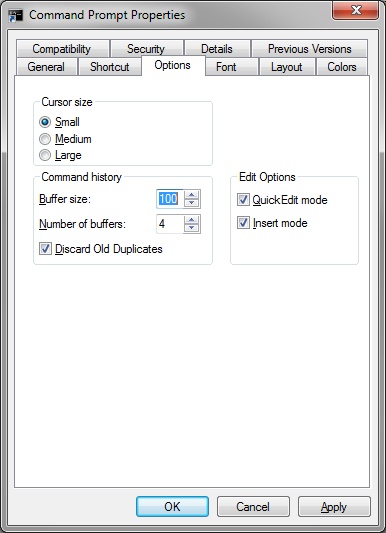 Personally I don’t change the fonts or colors, but you may prefer different settings.  Play around, have fun. 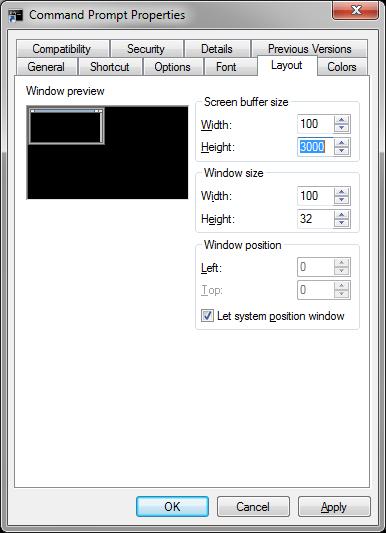 CMD.exe /? (help) in Windows 7
Starts a new instance of the Windows command interpreter

Note that multiple commands separated by the command separator ‘&&’
are accepted for string if surrounded by quotes.  Also, for compatibility
reasons, /X is the same as /E:ON, /Y is the same as /E:OFF and /R is the
same as /C.  Any other switches are ignored.

If /C or /K is specified, then the remainder of the command line after
the switch is processed as a command line, where the following logic is
used to process quote (“) characters:

1.  If all of the following conditions are met, then quote characters
on the command line are preserved:

If /D was NOT specified on the command line, then when CMD.EXE starts, it
looks for the following REG_SZ/REG_EXPAND_SZ registry variables, and if
either or both are present, they are executed first.

Command Extensions are enabled by default.  You may also disable
extensions for a particular invocation by using the /E:OFF switch.  You
can enable or disable extensions for all invocations of CMD.EXE on a
machine and/or user logon session by setting either or both of the
following REG_DWORD values in the registry using REGEDIT.EXE:

The command extensions involve changes and/or additions to the following
commands:

To get specific details, type commandname /? to view the specifics.

Delayed environment variable expansion is NOT enabled by default.  You
can enable or disable delayed environment variable expansion for a
particular invocation of CMD.EXE with the /V:ON or /V:OFF switch.  You
can enable or disable delayed expansion for all invocations of CMD.EXE on a
machine and/or user logon session by setting either or both of the
following REG_DWORD values in the registry using REGEDIT.EXE:

If completion is enabled with the /F:ON switch, the two control
characters used are Ctrl-D for directory name completion and Ctrl-F for
file name completion.  To disable a particular completion character in
the registry, use the value for space (0x20) as it is not a valid
control character.

Completion is invoked when you type either of the two control
characters.  The completion function takes the path string to the left
of the cursor appends a wild card character to it if none is already
present and builds up a list of paths that match.  It then displays the
first matching path.  If no paths match, it just beeps and leaves the
display alone.  Thereafter, repeated pressing of the same control
character will cycle through the list of matching paths.  Pressing the
Shift key with the control character will move through the list
backwards.  If you edit the line in any way and press the control
character again, the saved list of matching paths is discarded and a new
one generated.  The same occurs if you switch between file and directory
name completion.  The only difference between the two control characters
is the file completion character matches both file and directory names,
while the directory completion character only matches directory names.
If file completion is used on any of the built in directory commands
(CD, MD or RD) then directory completion is assumed.

The completion code deals correctly with file names that contain spaces
or other special characters by placing quotes around the matching path.
Also, if you back up, then invoke completion from within a line, the
text to the right of the cursor at the point completion was invoked is
discarded.

The special characters that require quotes are: